and i know i talk about myself maybe a little too much on this blogity-blog...so if you get {ultra} bored w/ me, just stop reading & refer to one of the many hilarious/highly entertaining blog links off to the right. k? k.

number one crazy fact about me/my life=we {being me & the m-diz} are vacation-impaired. it's true. in fact, it's a miracle sent directly from the heavens above that i made it through our recent {and amazing, might i add} cancun trip without getting sick/sabotaging all the fun for everyone. 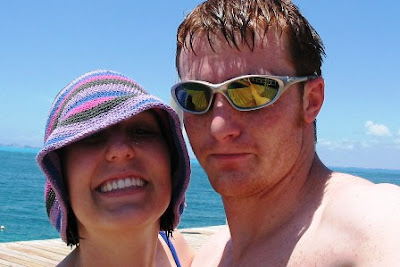 example#1:
the time myron & i went to cancun on his parents' tab for our honeymoon. i decided it might be a nice time to pass kidney stones for 5 days. oh, and he thought it might be fun to bite into some food and have his front veneer fall out. {notice the closed-mouth-smile o' photograph, ya.} i was basically out of commission the whole week, feeling guilt the entire time, while my SWEET yet kinda hick-ish front-toothless husband served me. it was hot. someday soon, i plan to email montel williams, go on his show, tell our tale o' drama & win a second-honeymoon. "that's the current plan, yes." what movie?
example #2:
a year later we decided that it'd be fun to go to cali for the weekend to make up for our misfortunes in me-hico. in the wee hours of the morn, our first night there, i got REALLY sick. but i felt SO bad because i didn't want to ruin yet another vacay for the dunn couple. so, me, in all my infinite wisdom decide it might be a great idea to NOT wake my husband up like a normal person would, but to take a CAB by myself to the local/downtown LA-LAX clinic & grab some meds. {i didn't want to spoil our six flags plans, duh! and i didn't want to wake my sweet husband from his slumber...} there were no cabs available @ the time, so the kinda freaky-ish shuttle driver snuck me into his bus, ALONE, and off we went! {i honestly left every ounce of common sense i possessed in AZ!!} long story short: being a very white, highly sheltered, obviously naive, twenty year old girl ALONE on the streets of LA {@ 2am} with 5 dollars cash to your name isn't the smartest thing to do in the world...and you might be REALLY terrified if you find yourself under those circumstances. oh, and your husband will be worried sick, unless of course you DIDN'T wake him up, and then he'll randomly wake up @ six & wonder where you are, and think you're probably just getting ice from the machine down the hall. the end.
example #3:
utah excersion 2004. myron & i pack the car up to head north for his mission reunion. the man, of course, typically drives both ways on such roadtrips because, truth be told, you couldn't pay me a million dollars to drive to utah angie-behind-the-wheel-style. {ridic, i know} anywho...myron had just gotten some gum grafting surgery done on his mouth a few days before, and apparently it wasn't stitched up quite right because all of the sudden his mouth is bleeding h-core. so after filling like, seriously a QT 32er w/ blood, we decide to spend the night in page, & head home. {grr} i cried. which, now that i think of it, probably wasn't a very sensitive-wifeish thing to do, seeming how myron was the one losing massive amounts of blood...but i digress. myron was kinda pre-occupied with the whole mouth hemorrhage thing, so i reluctantly took the wheel. BIG MISTAKE... seriously, i had a panic attack the WHOLE way home, as i drove 45 behind the fed-ex truck, with a shaking leg, and my childhood flashing before my eyes, refusing to pass anyone. i think it might have taken 8 hours to arrive, i'm not sure.

so ya, we're awesome.
hence the reason we are content to visit places like costco & fuddruckers & chucky cheese for our fam vacations.
{lol}

Labels: apparently a long post for a long day also

Wow, I don't think I would ever leave Mesa again. Those sound like some very traumatizing experiences. But, I'm glad that you have escaped and with your incredible sense of humor intact. I will most definitely stay tuned for 2-7. Despite what you may think, you are quite the entertaining blogger. And what is a blog for if not to talk about yourself? I do not know.

Ang: Keep on blogging. You make may day each time I read one of your posts!

Ang-
I remember each one of those experiences and feeling so bad for you each time. I am so glad that you made it through those times. And I can't wait to read 2-7. And I have been tagged also...so hopefully I will have mine done soon!

Now, just guess which one of your Thursday Simplicity students (AM) is leaving you this msg. ;)

The movie is The American President, a personal fave.

ok, i love/feel really bad for you in all of these stories! ha ha! i love reading your blog as well, which is why i check it approx. 17 times a day! ha ha! i think i need to hear all these stories in person to truely get the full affect!

When I need a smile I know I can pretty much find one here :)

k, mademoisellechithcat...i certainly have my guesses, but would hate to guess the wrong girlie...so please, enlighten me??? (: thanks for the kind words, yo. hope you are having a super happy weekend! -ang

1.) I'm the student who takes your Thursday AM class.

2.) I used to not be able to cut for the LIFE of me. I always said, "Angie, would you please pre-cut the titles for the cutting impaired?"

4.) I sometimes say when I have to cut a title that the experience is challenging my walk with Christ.

Okay, for the record, your story about going to the hospital in the middle of the night while being in scary-ville terrified my mother so much, that she called and told me the story while I lived in Utah. 700 miles away. So, you scared your own clodhopper and the SJ as well..

How was the concert?

i knew it was you!! ha! it was FABULOUS!! we had a GREAT time, thanks for askin'. how are you...excited for your new job?

If we lived closer, I would take you to the DQ for guessing correctly. ;)

RE: the concert, wonderful!

RE: my job, YES. Truly, I am looking forward to this new opportunity that God has blessed me with.

Tomorrow AM - - - I am heading home to see la familia (in IN). I'll be gone for a week, but I'll make sure to write down your blog address. ;) My camera and charger are already in my purse.


Now, compose and post, woman. I am looking forward to my daily chuckle from your "daily adventures." ;)

cicely...you TOTALLY crack me up I just love ya! i hope you have a great time with your family in IN! have an amazing trip & take lots of pictures!! take care!
ang

Thank you. I arrived home safely. I have seen:

I will take plenty of pictures.

Is it reallythe American President? I was gonna guess something along the lines of Ocean's Eleven... Lol!

i feel like I can not keep up with your BLOG! Dang Gina. You are really quite involved with your blog! *wink.
I love reading random things about people. FYI: If I were rich, I would send you on a trip!! I feel so bad. Have you 2 ever had luck on a trip? I am being serious!
So sorry.
OH! & I totally want to know what happened in LA. What were you thinking?????