Here's yet another trendy blog tag.
This time, involving a hot redhead. 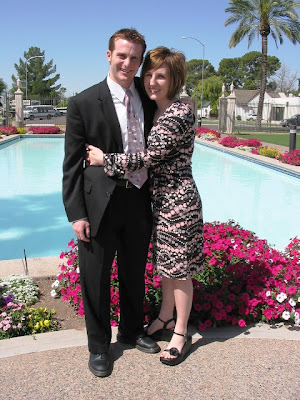 1. Who is your man?
Myron Lee Dizzle Dunn

3. Dating/Engaged/Married?
We kinda forgot to date. We accidentally fell in love. We were totally just hanging out as friends and then BAM!! Valentine’s Day 2003 was the moment of truth, we were engaged March 16th & married May 17th.

You or your man?

1. Who eats more?
That’s an easy one. Totally me. Myron doesn’t get hungry. Nor does he crave things. Rarely does he go for seconds. I=the polar opposite.

2. Who said "I love you" first?
Him. But I’m pretty sure the first time he told me he loved me was him belting “I think I love you” by the Partridge Fam in a really annoyingly random voice just to be, well, hysterical.

3. Who weighs more?
Him. May it stay that way forever.

4. Who sings better?
Myron. But he won’t admit. I sing louder & basically all the time, but he has the better voice. Every time I tell him this, he says, “Whatever, you totally made Teen Tones.” To which I reply, “No I didn’t.” To which he totally cracks up because he knows that is a sore spot for me & shouldn’t be because it was Jr. High/10 years ago.

6. Who's smarter?
Totally Myron. I always tell him he shoulda been in ELP. He’s way smarter than he gives himself credit for. The man can figure out anything!

7. Who's temper is worse?
When the Suns lose/refs are geigh? Him. When Lost is a blasted re-run or yet another annoying re-cap of episodes I’ve totally already seen? 8. Who does the laundry?
Yours truly. We might be better off if he did it though.

9. Who does the dishes?
Mostly me, but he’s totally down w/ helping. He’s good like that.

14.Who pays the bills?
Myron brings home most of the bacon/ works his guts out. I supplement some bacon. And I write the checks & send the bills out, check the accounts, blah, blah, blah. I LOVE paying bills and being ridiculously organized about it.

15. Who cooks dinner?
Um, usually me. Myron probably once a week. And Chipotle, Barros, Rio, & TB do the rest!

17. Who drives when you are together?
Always Myron. I loathe driving.

18. Who pays when you go out to dinner?
Whoever, same dif.

20. Who is the first one to admit when they're wrong?
Hopefully whoever 's wrong.

21. Who's parents do you see more?
Since the Dixon Family Fairness Doctrine is ingrained deeply into my soul, we see both sides pretty much the same amount of time, down to the minute. Jk, but pretty much.

22. Who kissed who first?
Myron kissed me. And then I started laughing hysterically/falling off the couch…saying, “I just kissed Myron Dunn, hahahahahahahaha”…I later found out, that didn’t boost his self esteem very much. Woops.

23. Who asked who out?
Um, we were hanging out every waking second that wasn't spent @ work or school.
It was just a given.

24. What did you do?
We saw “How to Lose a Guy in 10 days”…this is when our relationship was still on the DL-hardcore because I was still in major denial about us being a couple/way in love. That night we saw like 5 thousand people we knew @ AMC & confused the heck out of them. It was a very funny & memorable evening.

27. Who is more indecisive?
For sure me. I’m an expert @ being indecisive. Ask Myron about me & picking out paint. I rock.

29. Who wears the pants in the relationship?
It’s pretty even. We make a pretty rockin' team.

30. Who has the best husband ever?
So me. And anyone that knows me, knows I know so.

Labels: the truth about Angron

Ang I totally remember seeing you that night with him. And I had no idea and I worked with you like every second. And I remember you coming to work after and telling me and I was TOTALLY surprised! Oh that was a fun jog down memory lane! But, I am so happy that you married him and are so good for each other!

love it. LOOVE! You guys are so dang cute it kills me :)

how pathetic is it if I wanna be tagged. Love being tagged. TAG ME TAG ME!!!

Oh. My. Gosh. Truer words were never spoken about the Lost frustrations! But, maybe you know and can get to the bottom of this: When is the new season starting?? I heard not till February, and I'm beginning to believe it since I haven't seen any previews for it. Shouldn't it be starting soon, though?!

You guys are a pretty rockin team, I agree. What a cute picture of you two! When was that taken?

you two are so dang cute!!! love the answers. i just smile so big when i read your blog. thanks for getting back to me about the jorge too.

Alisse, the new LOST season starts in February but they start showing last season in October or November. I can't remember which. All I know is, ABC's wesbite on this info SUCKS. I cannot wait for the new season to start. Does else's husband have night classes on Wednesdays and want have LOST parties with me?

That was super fun to read! Ya'll are cute!:) I love that picture too! you both look GREAT! :)

you two are SO cute ang! i can't wait til i find a cool guy like this!

So cute, and so fun. I'm glad for these trendy blog tag things, because it totally plays to my nosey nature and I get to find out things that I want to know about people (you, for example), but don't have the guts to ask about after not seeing someone for approximately six years. "So...you got married and had a kid, huh?" Ya, I'm awkward. Anywho, you guys sound like quite the match, good job with that.

I remember when you were in denial too- and I'm so glad the two of you ended up together! You're absolutely an adorable couple!

That was a fun read! I think that Myron totally sent out invites the night you guys went to AMC...he just wanted everyone to see you with him (and watch their reactions)...and you thought it was just coincidence! Ü

Angie, can I even express in words how much I adore you? How stinking cute are you that you thought to buy me tiny Old Navy fingernail polishes?! I really enjoy the fact that we have been friends for a long long time which dates back to our pre-figure out who we are selves!

Um, that entire Utah trip was "Da Butta"! I just remembered that we made a tape that trip, and we would listen to everything that we had recorded and laugh and laugh and laugh, thinking that we truly were hysterically funny, and I doubt that anyone else could have thought it was even remotely entertaining. Oh, and almost running out of gas was funny/I'm really sorry that I probably scared the crap out of you with my not awesome driving skills! Also, that shirt that I got in Park City is probably my all time favorite shirt, and even though I have not been able to wear it since pre-temple over two years ago, I just barely got rid of it, because I just couldn't bear to let it go! And now I'm kind of sad that I did, and I might go to DI and try to find it/buy it back up and put it in my hope chest just for sweet memories. Hmm, I hope it's still there.

Also, since we're being sentimental here, I've been needing to thank you for the past two and a half years at least, for helping me not be totally freaked out about falling in love with someone who is nothing like I ever thought I would! I really like that we lead identical lives, minus me having an adorable girlie, or any creative bone in my body, and minus you having troubled/leprocy skin. Other than that, seriously twinner lives.

While I am leaving the longest post known to man, I need your Angielicious touch in more ways than one. So you know your Home Sweet Home letters? I was wanting to do something kind of like that but on a larger scale, like with the enormous cardboard letters that you can find at Joann's ETC, and I was wondering if you could tutor me on how to go about that and/or do them for me. Basically I would like to hire you to cute up my life.

Anyhoo, since I have typed like the book of Alma, I should stop. You are a gem Ang, I heart you!

Wow, Valentines Day 2003 was the moment of truth for Pete and I too. That's so fuuny. And we were engaged a few days after you and Myron were. We got engaged on March 21st. How weird....but crazy cool. Our hubbies are both 27 too. Go 1980!