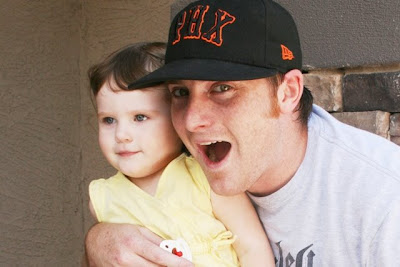 my better half turned 29 last week.

i love this guy more than life.
& i shall festively list 29 reasons why.

2. he is highly animated & extremely passionate about life.
these are two genes he {definitely} passed down to our chlo-ster.
[and i love him for it.]

4. he really likes to be on time & productive & rise from his bed early-ish,
but he's also okay with sleeping in, and being lazy with me from time to time.

7. his sincere desire to serve his peeps on his weeks off.
anyone need a ceiling fan hung?
or a bed moved?
or blinds installed?

8. he is truly one of the tenderest most hands-on daddys ever.
[he is currently busting out "popcorn popping" with chloe....hilarious animated actions included.]

9. myron is not afraid to stand up for his beliefs. he is firm. and bold. and strong. and very opinionated. [and proud of it.]

11. he'll live in an 8x8 prison cell, eat less-than-desirable cafeteria food, put up with MUCH-less-than-desirable surroundings, drive a haul-truck that smells like nicotine & BO around the mine for 13+ hours a day, miss his family dearly, and rarely complain about it...all to support, protect, provide, and honorably serve his girls.

13. he's an adorably obsessive researcher/shopper/gift-giver. whether it's finding the most inexpensive electronic item, or a perfect greenhouse for clodhopper that he wishes he could afford to buy for her.

14. he balances me out, calms me down, and makes me smile.

17. he is serious about his sports: suns, asu, ufc.
he also means business when it comes to ps3.
*ask him about his rockband, no smoking.

18. he believes in living the gospel truthfully & honestly.
[what you see is what you get.]
no going through the motions for myron: he does it 'cause he wants to.

19. he's thoughtful.
[and i have a-half-a-dozen sweetest voice mails saved on our answering machine to prove it.]

20. he is tight with my little brother eric.
{a pre-requisite to us getting married.}

21. he loves his family h-core.
his mom.
his dad.
his sisters audrey & bridget.
the dogs. [which are also humans.]
his grandparents.
his cousins.
his name.
his heritage.

22. he has the most amazing green eyes, freckles by his eyes, and smile lines by his eyes.
by far: my favorite myron-trait.

23. he knows that if you put a can of pepsi in the freezer for 70 minutes, it'll be iced perfection.
{and he's willing to wait that long for perfection.}

24. he loves ireland.
he thinks he's irish and maybe a leprechaun.
{we are contemplating scheduling my c-section for march 17th.}

25. myron is the most non-high-school guy ever.
he loves people for who they are.
social-status, religion, appearance is never a factor.

26. myron went from amazing-chef-debra for a mom
to crappy-cook-angie as a wife.
and he n'er complains, always encourages, and loves me just the same.

27. he is a good mix of confidence & down-to-earth-ness.
he's humble, but tries not to sell himself short.

29. myron is my human security blanket.
{and i kinda find myself needing said blanket often.}

*lucky thing is: it is forever accessible.

happy birth babe.
i just love you.
Posted by angiedunn at 10:24 AM

Happy Birthday To Myron!!! :) Hey did you guys get that place that you were looking at? Hope everything is going good! Have a great day! :)

To answer #7: Yes, Yes, and Yes. Do you think he could swing by at like two-ish?

i LOVE how you two were/are made for each other! Makes me smile!

Happy birthday Myron! A good husband and a happy marriage makes a lot of other, smaller things much easier to handle.

Love that My-dawg. Give him hugs from all of us.

so freakin sweet! happy birthday Myron!! you rock!! I love the pepsi one. I never knew and I might have to try.

Tears, for real. You guys are two + two of my favorite people. Happy Birthday Myron!

That list is super cute. You guys are most def my role models for what I want to be like in 5/10/15 years.

I gave a little gasp of happiness when I read number 15 because I'm currently obsessed with 90's alternative rock.

p.s. I fully plan on winning the lottery when I turn 21, so don't worry, I'll hook you up when I do.

I love how happy you are and how happy he makes you! Happy Birthday Myron!
But I still miss you....

Myron...you rock dawg! Happy Birthday...I would say late, but I texted you. :)

man, this list cracked me up! i actually read it during my anniversary dinner, and ended up making steven read the whole thing. we laughed so hard! [especially at the irish one]

you have a talent, missy!