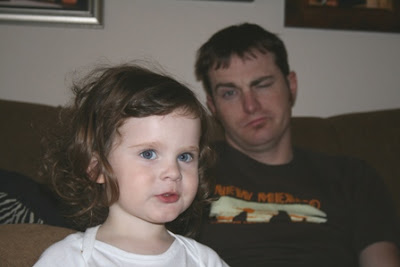 me & the redhead have [unfortunate] colds this week.

i'd definitely hafta agree with my adorably cute
{and also ailing} mother
on this one.

so, here's my plan for tonight.

1. a obnoxiously long relaxing shower
2. sweats & a cozy debra-made flannel blanket
3. a few hours of dvr goodness
4. sunny D a-plenty
5. vitamins for good measure
6. windows open while i slumber
7. 2-year-old in crib until [at least] 8am

{and that's my final answer.}

ps:
vicky didn't get voted off, people.
boycott anyone?

Posted by angiedunn at 8:12 PM

yuck. I'm feelin' your pain w/the cold thing. I caught one of those gross head colds (you know, the kind where your nose is literally flowing) and can't take anything for it b/c of another med I'm on. I hope your Sunny D & dvr provide you with the needed comfort and that your 2 year old is indeed in bed until 8 am. :)

Awww bummer! Do you guys need anything? I make a killer Ramen Soup! :)

Blech, we had this the last couple of weeks but at least David and I had it separately so the other one could run the house! Dev has it this week, poor guy. I hope you guys get better soon!

Get lots of rest! Get well soon!

Hey lady, I hope you are feeling better soon. Hubby and I rocked that cold for at least two weeks between the two of us. SO NOT FUN!! But, there is something that kicks the crud like nothing else -if you're tough enough- mix about a quarter to half a teaspoon of ceyenne pepper with a mug of OJ plus a little honey to help it go down better... and it burns and tastes horrible... my first few tries were not successful... but once you can get about half that mug down it really does help out the congestion monster.

AND I remember those debra-made flannel blankies. My mom joined her one year and I still tote mine around too!

And I KNOW about Vicki! She is such a mean spirited person. I was really annoyed that Amy didn't vote her off when she had the chance. She totally let the blue team bullies get to her and she should have just stuck to her guns about doing what was best for HER -because Colleen wasn't only a nice, sincere, genuine person -but she wasn't even half the threat as far as weight loss goes -y'know? I was totally screaming at the t.v.

BUT did you see at the very end of the last episode? Where they said America was going to decide who the third person was for the finale?? That gives Michelle a good fighting chance -I'd say!

Hope you you feel better! I got the flu right when we got home from Utah and I hated it!!! If you need anything let us know! :)

I hope you feel better....colds suck.

I really hope Vicky is NOT the Biggest Loser. That would not be good.

8am?! Dang, you've got that girl trained well. Ok, so I've been wondering, with all of the job loss at the mine, has that had any impact on Myron's job? Hope not!

Um, yeah. I'm sporting a cold as well these days. We might be thousands of miles apart, but we still share a few things.